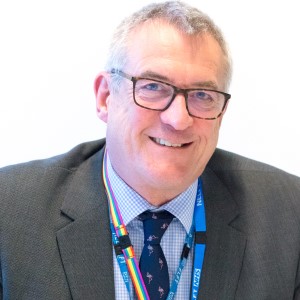 Bob Champion is our executive director of workforce and organisational development. A Fellow of the CIPD, Bob was substantively appointed to NELFT in September 2015 after occupying the post on an interim basis for just over a year.  Prior to that, Bob operated independently for six years, undertaking senior interim and consultancy roles across the length and breadth of the country and across all NHS sectors. Bob’s previous substantive role was as Director of HR&OD for the Cluster of four PCTs in Teesside. During his tenure there, Bob was a member of the NHS Employers Policy Board and Chair of the National Diversity Group.

Now in his third career within the NHS, Bob moved into Human Resources Management in 1995 from operational management with North Yorkshire Ambulance Service. Serving just short of twenty years with Ambulance Services, Bob was one of the first operational Paramedics in the West Midlands and still maintains a first aid qualification. At the start of his NHS experience, some 45 years ago, Bob started work as a Porter in his local hospital in Birmingham and went on to train as an Operating Department Assistant at Southend General Hospital. Bob, therefore, has a great affinity with clinical services and a good understanding of life in the front line. Away from the Trust, Bob chairs the London Mental Health HR Directors’ Network and is an employers’ representative on the London Social Partnership Forum.

Married with four children, four grandchildren and numerous pets, Bob and his wife are approved Foster Carers and look after a ten year old boy as a long-term placement. Bob’s other passion is Rugby Union and he manages the adult 1st XV of his local Club in Ripon North Yorkshire, as well as coaches junior players.