NELFT NHS Foundation Trust provides a range of  community health and mental health services across the north east London Boroughs of Barking and Dagenham, Havering, Redbridge and Waltham Forest, Essex and Kent and Medway and Barnet

Staff at Langthorne Health Centre in Leytonstone were delighted to welcome back Zena Edmund Charles-Josephs where she marked her retirement by donating a bench for patient use in in a short presentation ceremony to friends and colleagues.

“I spent such a long time here, I needed to leave my mark!”

Born in Jamaica in 1932, Zena was the youngest of ten children and came to England in 1956 to pursue her nursing career.Zena a former midwife, Queens Nursing Institute district nurse and practice nurse worked at Langthorne Health Centre from 1985 -2015. Doctor Elkan Lewis, a Leyton GP, saw the need to improve patient care and started a campaign to have a Health Centre built in the area.  At that time Zena was working for Doctor Lewis as a practice nurse and thus became integral to the campaign, making phone calls and visits to councillors Frank Marshall and Eleanor Bartham. 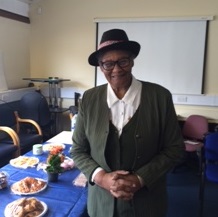 Langthorne health centre was built on the waste ground of Langthorne Hospital, with 9 consulting rooms at a cost of £1.4 million in 1985. Zena had the idea of donating a bench for patient and staff use and a plaque to commemorate her time at the centre and approached Health Centre manager Ray Diaz Calvo, who was delighted to accommodate the idea.  Ray said:

“It is an honour for us to commemorate Zena’s time spent working out of Langthorne health centre and it is a pleasure to welcome her back today, where she is amongst colleagues old and new.  We thank her whole heartedly for her donation of the bench and think the plaque is a wonderful idea and a fitting tribute to her work in this community.”

Zena was awarded the MBE in 1996 for services to community nursing and is also a Fellow of the Queens Nursing Institute.