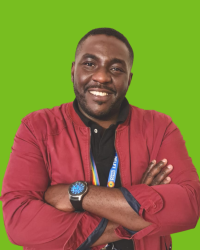 His QI journey started in 2017 after completing the facilitator training. Patrick then went on to finish his Mentorship training the following year. He was given the NELFT Quality Improvement award 2018 for his contributions to QI and he is very passionate about Dementia and a Dementia friend.

As a Support Worker where his journey began, Patrick felt the QI opportunity was just for certain NELFT bands but was amazed at the reception and support he got with his project on reducing the use of risperidone for people with Dementia in care homes. He also won an award for best poster in the 2018 Dementias Conference in London. His QI poster has also been accepted for presentation in June 2018 in Birmingham by the Royal College of Psychiatrists. Patrick’s QI experience also gave him the opportunity to present his QI project at the Alzheimer’s Europe conference in Barcelona.

The QI team demonstrated that QI was truly for everyone, and he felt very special in their midst. He was pleased to see the change he was influencing from his position as a support worker and all it took was just one small change. He is now encouraging other support worker’s within NELFT to join in the QI revolution and journey to spear head the change they want to see.

“ Anyone who thinks they are too small to change the world, have not been in bed with a mosquito ” … unknown