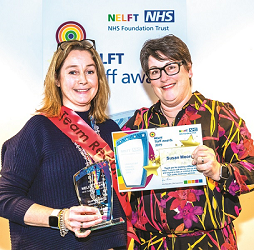 We are pleased to announce that we have now attained ‘Achievement level’ in the Healthy Workplace Charter.

Brookside, our young people’s mental health inpatient unit, has been awarded an accreditation by the Quality Network in CAMHS which is overseen by the Royal College of Psychiatrists (RCPsych).

We are delighted to announce that our new community blood testing service in Waltham Forest has been praised in a review by local NHS commissioners.

Sue Burke, Acting Head of Integrated Community Services in Basildon and Brentwood has been given the prestigious title of Queen’s Nurse (QN) by The Queen’s Nursing Institute (QNI).

NELFT nominated for two awards at the 2018 Inclusive Companies awards

Our equality and diversity manager, Harjit K Bansal and the EMN network were nominated for the Outstanding Diversity Network Award and Diversity Champion Award.

We are delighted to announce four of our staff have been recognised as inspirational women leaders across the NHS in London.

Geraldine Rodgers and the Significant 7 project, set up to support care home staff to improve the physical health care of older people, have been shortlisted for a prestigious RCNi nurse award. 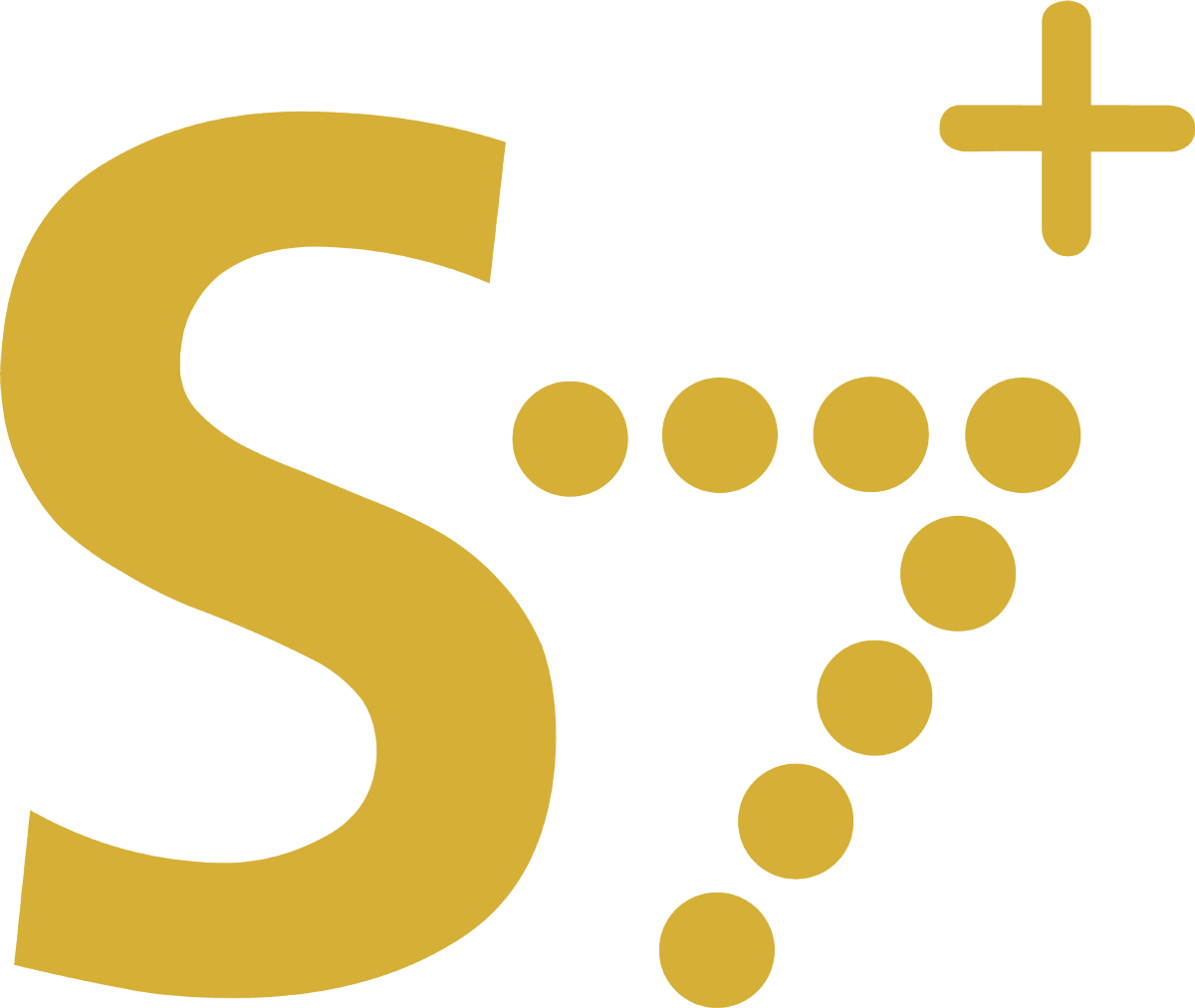 The NELFT Finance department received an accolade recently from the NHS Finance Leadership Council (FLC). The Council awarded NELFT Future Focused Finance Level 1 accreditation. Currently, only NHS Improvement and NELFT have this level of accreditation in London. The accreditation was launched in December 2016 and aims to demonstrate the organisation’s commitment to the development of finance skills across the workforce.

NELFT’s Memory Service in Waltham Forest has received an accolade from the Royal College of Psychiatrists. The service has been awarded a Sustainable Mental Health Service Commendation.

Two NELFT nurses have been nominated for the prestigious Nurse Awards

Collaborative project in Barking & Dagenham has been shortlisted for an award

A project in Barking and Dagenham has been nominated for an award. The work of the Physical Health Care for patients with Psychosis (PHCP) project has been shortlisted in the Health Initiative of the Year for this year’s Chemist and Druggist Awards.

NELFT is delighted to announce that the Trust has achieved the London Healthy Workplace Charter Accreditation at Commitment Level. The Healthy Workplace Charter is a set of standards that organisations meet in order to receive an official accreditation (and award). The Charter is backed by the Mayor of London and provides clear and easy steps for employers to make their workplaces healthier and happier.

NELFT Health Visiting Waltham Forest together with our partners, HENRY and the Lloyd Park Children’s Centres, received a UNICEF Certificate of Commitment to the Baby Friendly Initiative (BFI) at the ‘Celebrating two-year olds’ partnership event.

The work of a NELFT team has been highlighted with the shortlisting in a category at this year’s JWC Awards. The Journal of Wound Care Awards ceremony will take place at Banking Hall in London on Friday 2 March.

NELFT celebrated its inaugural talent show, NELFT’s Got Talent, celebrating the creative talent of our colleagues. Presented by the NELFT Communications Team to a packed house of colleagues from across London, Essex, Kent and Medway, attendees were indulged with great entertainment from singers, a ukulele player, an aerial hoop performer, a variety of dancers including traditional Indian dancing and body popping.

NELFT's Pressure Ulcer Prevention Groups won the Innovation in Chronic Wound Care award for their delivery of this service to local people at the Nursing Times Awards on Wednesday 30 October.

The Nursing Times Awards showcases the innovation and best practice of nurses and midwives across the country. A spectacular evening of recognition, held at the Grosvenor House Hotel on Park Lane, the team headed by NELFT‘s Debbie Smith, Director of Nursing/ Patient Experience said: “We’re delighted to receive such a prestigious national award, recognised amongst other NHS professionals. I would like to say a huge thank you to all that have been involved in this project across Health, Social Care and the Voluntary sector. The project was dependent on a strong partnership approach across organisational boundaries. I would like to say a special thank you to Debbie Wickens for her innovation and dedication to the project and to the prevention of pressure ulcers within the community”.

The award was for their work in pressure ulcer prevention, in particular for a suite of resources they have developed to enable early screening and education of patients by multi professional teams within NELFT, as well as carers and social workers within our local community.

The judges felt our winner demonstrated a collaborative and effective approach to multidisciplinary team workload and impact on patient outcomes. Our winner educated patients and carers in a practical and effective way. In developing this simple tool, our winner has addressed an issue that most people find “too hard”. Judges believe this idea is sustainable, adaptable and transferable.

NELFT Senior Tissue Viability Nurse Specialist, Debbie Wickens said “I am so proud to be part of a team of colleagues crossing disciplines with a common goal to prevent the life changing and sometimes life ending consequences of pressure ulceration.   It was an honour to be part of such a prestigious celebration of nursing and we can’t wait to carry on the good work by spreading our ideas across NELFT and further.”

Trainee nursing associate, Patrick Onyema, wins Gold in the Apprentice of the Year category at Our Health Heroes awards 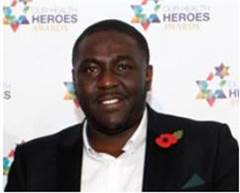 Patrick Onyema, a trainee nursing associate in NELFT’s Dementia Crisis Support Team, has been awarded Gold in the Apprentice of the Year category at the prestigious Our Health Heroes awards.

Patrick was presented with his award at the fourth annual Our Health Heroes awards ceremony at London’s Science Museum, which honours the dedicated hard work our thousands of healthcare support workers and teams carry out across the sector day after day.

Apprentices working in healthcare are vital to support the high demand on the workforce, and often go above and beyond the call of duty. Previous winners of this award have shown a positive attitude and willingness to embrace their role in the workplace for the benefit of patient care and service delivery. Apprentices nominated for this award are not only ambassadors for their apprenticeship, but also the whole healthcare sector.

Patrick said: “I feel very privileged to have been voted to win this award. To me, this means so much and I am so humbled. It’s clear that it’s not the big things you do that make you great, but the little things you do in great ways.”

John Rogers, Chief Executive at Skills for Health, said: “Congratulations to Patrick on being named national winner of the Apprentice of the Year award. Having read through the nomination which was submitted for Patrick and hearing more about his drive to improve services and care for his patients, I can see why the public voted for him to be our national champion."

NELFT have been awarded the silver Employer Recognition Scheme award (ERS) in recognition for their support and commitment to the Armed Forces at a ceremony in the Cavalry and Guards Club, Piccadilly on 25 November 2019, alongside 33 London-based businesses. 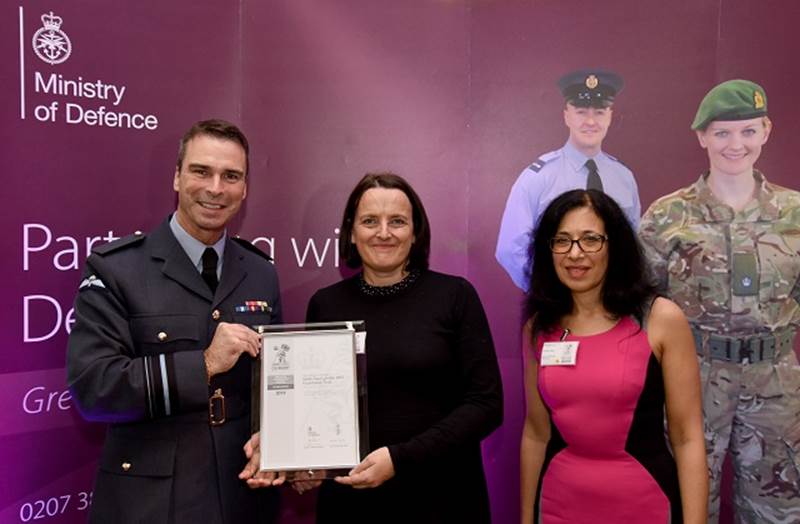 The scheme recognises and rewards UK employers for their support to defence personnel. The government is committed to supporting the armed forces community by working with a range of partners who have signed the covenant. The covenant is a national responsibility involving government, businesses, local authorities, charities and the public.

Brigadier Marc Overton, Chairman of the Reserve Forces’ and Cadets’ Association for Greater London (GL RFCA), who hosted the event, told the audience: “What you have done and continue to do makes a huge difference to the Armed Forces family. Thank you to you and all of your staff for going the extra mile in recognising the important contribution that our serving personnel, veterans and their families make to the nation”.

The ERS recognises organisations that clearly demonstrate support for defence personnel, including giving paid leave for reservists to train in readiness for future military operations, offering work placements or interviews to veterans and actively encouraging staff to join the reserve forces.

Peter Germain, chief executive of GL RFCA, said: "All of us have a role to play in ensuring that members of the armed forces are not disadvantaged by their service. All of these companies are setting an example for others to follow”.

The evening was organised and run by The Reserve Forces’ and Cadets’ Association for Greater London. 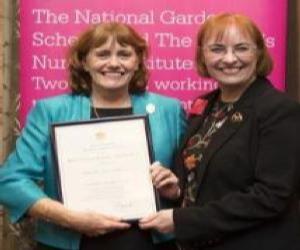 Liz said “Of course I feel both privileged and humbled to have received the honour as recognition of my services to nursing. Not just for the patient care, teaching and team management aspects of my role but also for the ambassadorial work I do for the Queen’s Nursing Institute which has led to me being involved with many different projects and enterprises that promote district nursing, as well as providing a shadowing experience for policy makers and other influential figures.

I need to thank my managers Helena St Roas and, especially, Karen Shepherd who has always supported me and facilitated my involvement in all these various ‘extra-curricular’ activities and I’d like there to be recognition of the tireless work all the community nurses do to ensure our patients receive excellent care.”

In 2017, Liz received the Queen Elizabeth the Queen Mother Award for Outstanding Service from the QNI. In addition to her nursing career, Liz has completed the London Marathon five times, raising over £20,000 for a local children’s hospice.